Feeding therapy for infants - There is feeding therapy for infants that you can do in order for babies to grow and develop optimally. Parents must pay attention to breast milk and the food they consume. Breast milk is the only food that contains nutrients needed for the growth of infants aged 0-6 months. But as the baby grows and grows, the baby needs energy and nutrients that exceed the amount of milk. 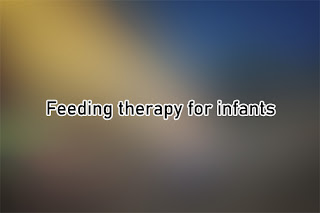 Complimentary food for breast milk is a food transition from breast milk to family foods that contain nutrients, given to children aged 6-24 months to meet nutritional needs other than breast milk. The role of supplementary food is not at all to replace breast milk, but to supplement breast milk. The introduction and administration must be done in stages both in form and in number, according to the digestive abilities of the baby/child.

The Importance of Breast Milk and Food

Therefore, to achieve optimal growth and development, you can give breast milk to infants aged 0-6 months. And the mother immediately began introducing complementary feeding to her baby who was 6 months old. This is the second baby food that accompanies breastfeeding. The reason it is given to 6-month-old babies is that breast milk is the only food and drink needed by babies up to 6 months of age.

Early provision of feeding therapy for infants in the form of complementary food has an immediate impact. The first impact is digestive disorders such as diarrhea, difficult bowel movements (bowel movements), and vomiting. Breastfeeding disorders such as reducing the baby's desire to suckle so that the frequency and strength of the baby suckling decrease resulting in reduced milk production. It also increases the risk of infection (infectious disease).

The long-term impact is weight gain (obesity) and food allergies. This obesity can continue until later adulthood. It could also cause impaired growth. If the food given is less nutritious it can cause children to suffer from Protein Energy Deficiency. Late provision of the complementary food may cause the baby is difficult to receive complementary foods.

It could also inhibit the baby's growth and development. The energy and nutrients produced by breast milk do not meet the needs of babies after the age of 6 months.

What Your Infants Should Consume

In the first 6 months of your baby’s life, the food given is only in the form of breast milk. These are given without any other food or drink other than breast milk (exclusive breastfeeding).  Breast milk is given only every time the baby wants at least 8 times a day, morning, evening, and night.

For the next 3 months, you could begin introducing breast milk complementary foods in the form of pulverized food (liquid and soft food texture). For examples, fruit porridge, milk porridge or mashed vegetable porridge, marrow porridge, and rice filter team. Breast milk is still given where breast milk is given first and then feeding therapy for infants for breast milk.